With a host of islands to explore in Indonesia, tourists are now looking beyond popular Bali

Bali has always been among one of the most popular destinations for families, adventure seekers and honeymooners. But with travellers exploring more traditional and modern dance, sculpture, painting, leather, metalworking, and music and of course temples, islands of Lombok and Komodo are fast
gathering limelight for magnificent beaches, breathtaking sceneries, marvelous trinkets and interesting culture.

> Lombok
Lombok is an island in West Nusa Tenggara province, Indonesia. It forms part of the chain of the Lesser Sunda Islands, with the Lombok Strait separating it from Bali to the west and the Alas Strait between it and Sumbawa to the east. The island is known for some of the best pristine beaches. With natural beauty in abundance and tranquility all around, Lombok is heaven for honeymooners. With some of the best private beaches and top-in-line accommodations, it has also been awarded as the best Halal honeymoon destination. The provincial capital and the largest city on the island is Mataram. It is somewhat similar in size and density with neighbouring Bali and shares some cultural heritage; but it is administratively part of Nusa Tenggara Barat along with sparsely populated Sumbawa. It is surrounded by a number of smaller islands locally called Gili. 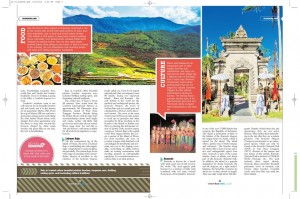